What is it?
Dry Needling is a term used to differentiate between needles used for injections (immunisations, steroid injections) and needles that are made of a solid filament, as used in the practice of acupuncture. This technique relies on the stimulation of specific reactions in the target tissue for its therapeutic effect. Dry needling’s focus is finding trigger points within the musculoskeletal tissue to help release tension in the muscle and in turn reduce pain.

How does it work?
The exact mechanisms of dry needling are not known. There are mechanical and biochemical effects. Research has shown that inserting a needle into trigger points can cause favourable biochemical changes, which assist in reducing pain. Think of a muscle contracting and relaxing. When it gets into a dysfunctional pattern from overuse or injury, the microscopic fibers get “stuck” creating a trigger point. Inserting a dry needle into those “sticky” points helps to re-start the inflammation process.

How is it different to Acupuncture?
Acupuncture is one part of a system of healing developed in China which has spread through Asia and the western world. Oriental medicine uses a system of physiology which imposes a system of channels or meridians in the body through which vital energy (qi) flows. These have branches deep into to the organs of the body and are the pathway through which the flow of energy in the meridians affects organ function and visa versa. The needling of points on meridians in the body are thought to help boost, harmonize and remove blockages in the flow of energy throughout the body.

Why Dry Needling?
Sometimes with soft tissue work, the trigger points are so deep into the tissue that they are hard to release. With dry needling, these trigger points can be accessed better because the needles can penetrate the area of dysfunction. Although you might be a bit sorer than when you first arrived to physio, once the inflammation settles decreased pain and increased range of motion are often experienced!

IT Band Friction Syndrome (ITBFS) is an overuse injury presenting as pain on the outside of the knee that increases with sporting activity. It is an irritation of a fat pad located under the IT band’s insertion site. It is commonly seen in runners, cyclists, military recruits and endurance athletes. 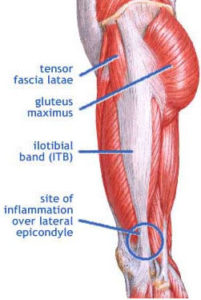 The Iliotibial Band or IT Band is a thick band of connective tissue that originates from two muscles, your Tensor Fascia Latae (TFL) and Gluteus Maximus muscles, and inserts on the outside structures of the knee. The IT Band plays a role in stability around the hip joint.

How is it caused?

There are a couple of factors that can make a person more susceptible to this type of injury, namely: foot and shank biomechanics, weak muscles such as the hip abductors, knee flexors and extensors. Tightness of the IT Band could also be secondary to shortening of the TFL and/or Glute Max muscles, or excessive development of the outer Quadriceps (Vastus Lateralis), placing an increased tensile load on the IT Band itself causing a burning sensation felt at the knee.

One of the most common problems is weak hip abductors, mainly our Gluteus Medius muscle. The action of hip abduction is the movement of your leg away from the centreline of your body. This action along with the group of muscles is mainly responsible for knee stabilization during activity (running, jumping etc…). Often the Glute Med is weak and the body decides to compensate by using another muscle that is usually the helper in knee stability. This is usually when the TFL muscle decides to kick in. The TFL isn’t as strong of a muscle as the Glute Med so it uses the IT Band to help stabilize the knee. When it tightens, a burning sensation felt on the outside of the knee.

How is it managed?

At home, it can be managed with ice and some anti-inflammatories in addition to stretching the TFL and foam rolling the TFL, Glutes and Quadriceps. You can foam roller the IT Band however, it is a thick connective tissue that doesn’t have a lot of extensibility compared to the muscles it is attached to. Should it not resolve, come in for some physiotherapy to help determine what the root cause of the problem is!