Wow!!Out of the blue I received a phone call from someone in Melbourne asking if I could do some sports coverage. This was back in 2013. Little did I know it was for the number one and number two team in the world for Ice Hockey!!! After consideration?? I quickly realised the opportunity and of course said yes.

I have been doing sports physio for many years looking after both individual athletes and teams, from professionals to beginners but had never anything to do with Ice Hockey. So I was very excited and up for the challenge.

Last year was very successful, Canada won the series, there was not too many injuries to report but l now knew l liked this sport.  So when asked again to assist for the 2014season l didn’t hesitate.

It was match day & I arrived at ALLPHONES Arena a couple of hours before start time. Once I got to the change rooms I had a line of players eager for some physio care. The doctor, a 1st aider and this year a masseuse joined the medical team we all introduced ourselves, and l realised l was the only medic with Ice Hockey experience. So l explained a little about what to expect, set up my treatment table and we got straight to work.

As the physiotherapist I was by far the busiest prior to the match, seeing too all current injuries, treating appropriately with manual techniques, strapping when necessary with either sports or Kinesio tape and assisted stretching.  Among the injuries treated were general tightness, neck and lower back problems, an ankle sprain, hamstring strains, Quad contusions, rotator cuff injuries but the most common by far were groin issues. This year the USA team needed more help, which was a change from last year when I saw more of the Canadian team.

While treating the guys I got to know the players personally as they started to open up and talk about anything and everything which is great! As this was my second year I already knew a few of the players and managerial staff and you get to know who is Mr popular, who the star player is, whose the trouble maker, the fight starter and the nice guy.

Once all players were seen I got some ice bags ready, grabbed my bum bag with equipment that maybe needed and headed down to ringside for the action. Although it was a fast paced game there was no major injuries aside from an AC injury for the Canadian goalie, everything else were mainly just bumps and bruises from too many scuffles. So I got plenty of time to get into the game! Take some great photo shots and see the USA team take out the series for 2014.

It was a thrill again to be part of not one but two  professional teams, the atmosphere in the stadium was amazing and despite the game ending and all the celebrations starting its such a buzz when some of the players actually go out of there way, come over to you and thankyou personally for all your  help. 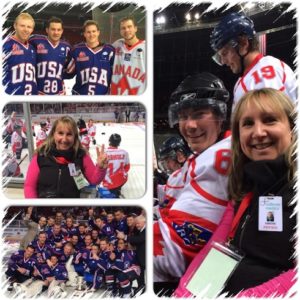 What to do when you have an injury

I’m a physiotherapist… and I’m injured! Ironic isn’t it? Unfortunately, not all harm can be prevented(Such as being pushed in mid-air, causing you to land on someone else’s foot and rolling your ankle). I know how to rehabilitate myself but even if I wasn’t a physio, I and everyone else, should know what to do immediately after an injury: RICE (Rest Ice Compression Elevation)

Even if you know what RICE is, remind yourself of the minor details which can easily be forgotten.

Rest from the activity that caused the injury. Heat, alcohol, running on it and massage to the area (HARM) can cause further swelling.

Ice the injured area. Grab a bag of ice wrapped with a towel over the injury for 15 minutes on and 15 minutes off for a few hours. Apply ice for 15 minutes every few hours for the first 48-72 hours. Leaving it on for longer increases your risk of an ice burn. Continuing to use Ice after the first few days may delay healing.

Compression is a good way to keep the swelling down. Make sure the injured area is compressed to prevent excess swelling which can also invade surrounding healthy tissue and be quite irritating. An elastic bandage works very well as it conforms to the skin as it expands.

Elevate the injured area. Allow it to lie above the level of your heart to allow reduction of swelling.

Some of you may also be confused about when to use ice or heat after the first 48-72 hours. Use Ice to help reduce excess swelling and to numb down pain if an injury starts to flare up. Otherwise on a normal day to day basis, use heat to facilitate blood flow and healing. If in doubt, please do not hesitate to give us a call and see us at the clinic.